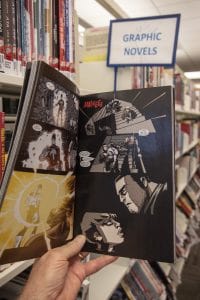 Some prolific fiction authors employ ghost writers who secretly pen the book while ceding credit. James Patterson, for instance, has ostensibly authored more than 200 novels, but it’s well known that he did not write all of those himself. So, what about manga?

One Piece, written and drawn by Eiichiro Oda, has 99 tankōbon volumes (manga chapters come out in magazines and are later collected into tankōbon, paperback volumes around 200 pages each). It started in 1997, and it still continues to this day. Surely, Eiichiro Oda did not write and draw all those volumes by himself?

Yes, and no. First off, it should be noted that manga authorship isn’t always as straightforward as fiction. For one, sometimes creators work as collectives. CLAMP, known for producing such titles as Cardcaptor Sakura and Xxxholic, is actually a team of four women who largely remain uncredited individually: Igarashi Satsuki, Ohkawa Nanase, Nekoi Tsubaki, and Mokona. There is no pretense that CLAMP is anyone's real name, and all authors have chosen anonymity.

Secondly, unlike fiction, manga involves both text and art. Often it’s the same person doing both, but not always. Death Note, for instance, is written by Tsugumi Ohba and illustrated by Takeshi Obata, and both have their names credited on the title page. This practice is similar to many Western comics. Marvel Comic’s Ultimate Spider-Man, for instance, was written by Brian Bendis and drawn by Mark Bagley (by the way, they hold the record at Marvel for the longest run by the same two people at 110 issues, a drop in the bucket to One Piece's 1000+ chapters). However, Western comics usually have additional collaborators that handle other aspects of the art. Ultimate Spider-Man #1 also lists Art Thibert as an inker, Steve Buccellato as a colorist, and Richard Starkings as a letterer. This begs the question: regardless if a manga is created by one person or a pair, does it employ similar collaborators, and are they credited?

Again, yes and no. Some, though not all, manga creators do have assistants, especially if the manga is serialized weekly with tight deadlines. These assistants can range from an unnamed partner to a full-on studio of employees. They might help with drawing backgrounds or filling in details (screentones, hair, clothing). And, while these assistants are not credited in weekly issues, there is sometimes a “thank you” or “day in the life of” section at the end of tankōbon volumes that does credit them. For instance, Narutopedia, a fandom wiki about the series Naruto, suggests that creator Masashi Kishimoto had 12 different assistants to help with Naruto's 72 volumes. These assistants are mentioned by Masashi, if not always by name, in the back of the tankōbon in an ongoing segment called The World of Masashi Kishimoto. Personal History: Special Friends. And, according to fandom wiki One Piece Wiki, Oda Eiichiro has worked closely with a “manga editor” for One Piece since 2008. This editor acts as a supervisor and gives input on the story.

Now, most fiction writers have uncredited “editors,” and assistants aren’t the same as someone penning a book in another’s name. So, does this mean manga have ghost writers? I’d say, “no.” But, there is definitely a hidden side to their creation that is fascinating.

For more information, take a look this article by Anime News Network which further dives into the topic of uncredited assistants in the world of manga. Another great read is the manga Bakuman, which details the life of a manga author and artist working together.

The Prince of Tennis