Wow kids, this has been a terrific week! I learned so much about ice cream. But let me start at the beginning.

Last Wednesday, I was relaxing in my usual seat and three little puppies stopped by. Aren’t puppies adorable? They brought their favorite book with them, and it got me thinking about ice cream. Everyone likes ice cream! Why isn’t there more ice cream in the library? 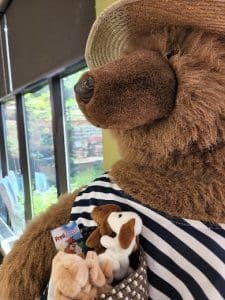 Of course, you have to be careful if you eat ice cream in the library. You have to use a lot of napkins and make sure you don’t drip on anything. Who wants a sticky book covered in someone else’s ice cream? Not me! None of you would do that to a poor old bear I’m sure.

Personally, I like vanilla ice cream with blueberries and ants in it. Yum. What kind of ice cream do you like? I decided I should ask all my friends around the library about their favorite flavors.

My first stop was Squirrel. He was practicing his Spanish, so we sat for a while and looked at his book together. He said he liked ice cream too and thought getting ice cream to share was a great idea! He thought Librarian Michelle could help me find some. 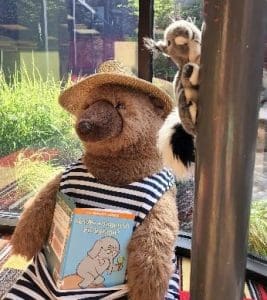 Since I didn’t see her around, I stopped at the sailboat table to ask Frog what kind of ice cream she likes. She said she can’t eat ice cream because it makes her break out in hives, so her favorite is popsicles. Especially lime ones. Then Librarian Michelle stopped by and she agreed—popsicles are excellent. She also said she’d take me to the store later so we could get some for everyone. 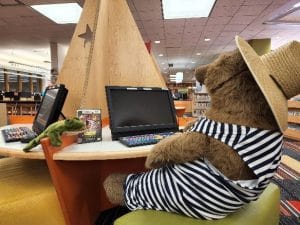 After that, I went to look at the video games while I waited. Fox was lounging nearby with his favorite book, which was all about ice cream. What a coincidence! 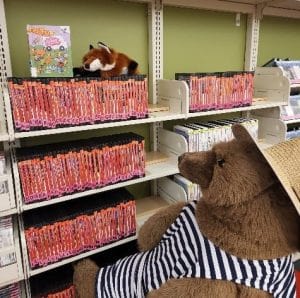 Raccoon stopped by too and we discussed the pros and cons of different flavors. Raccoon really likes marshmallow pickle ripple, which sounds gross to me. I mean, all ice cream is good, but pickle? Despite Raccoon's terrible taste in ice cream, she had some great books that I took to read while relaxing in the reading nook. 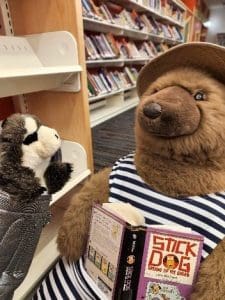 I got comfy with Little Pig, and we had a great time reading together in the nook. I had just enough time for a little nap too. All this thinking about ice cream was exhausting! 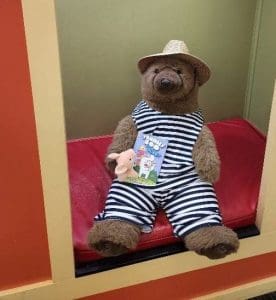 After a while, Little Pig woke me up and said Librarian Michelle was looking for me. Oh no! I was worried that I had missed my ride, but Michelle hadn’t left yet. I had just enough time to say goodbye to Whale. 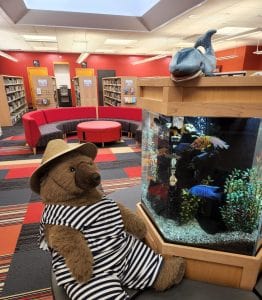 Then off we went to the store. Did you know the store has an entire case full of just ice cream? What will humans think of next? We got a good selection and made it back just in time for the party.

Well, there you have it. That’s what I’ve been up to. What adventures did you have this week? 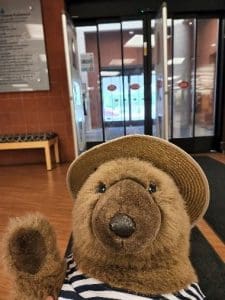 Debo compartir mi helado? – If your Spanish is not quite as good as Squirrel, we also have this one in English.

The Princess and the Frog – This is not about ice cream. Remember: Frogs can’t eat ice cream.

Stick Dog Dreams of Ice Cream – Another one with a dog. Who knew dogs liked ice cream so much?

Johnny Boo Finds a Clue? – Can a mountain steal your ice cream? Find out in this fun story.