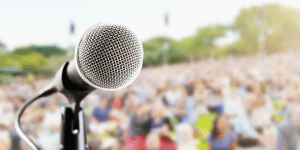 After a two-year hiatus due to the COVID-19 pandemic, music festivals are back in full swing. From New York to Los Angeles, summer is filled with the sounds of music once again. Festivals of every kind date back to ancient Greece. The word “festival” is derived from Latin, festivus, meaning a religious holiday feast. While modern music festivals may or may not focus on a religious theme, they are fun for all ages and abilities.

Modern music festivals gained momentum in the late 1960s. In 1968, Milwaukee hosted the first Summerfest. Along the picturesque shores of Lake Michigan, Summerfest features the industry’s hottest stars from a variety of genres on 12 festival stages—an immersive experience for the avid music fan.

In 1969, Woodstock became a defining moment in popular music history for the counterculture generation. Half a million people descended upon on dairy farm in upstate New York for a music festival billed as “An Aquarian Experience: 3 Days of Peace and Love.” The concert had its challenges. There were traffic jams, a lack of crowd control, poor sanitation, and food shortages. Days of rain and bad weather left the ground a muddy mess. But despite all the poor planning, Woodstock was a celebration of peace, love and music.

Among many lasting legacies of Woodstock is its strong impact on modern music festivals. While Woodstock represented folk music, in later years Lollapalooza would put alternative music onto the musical map. The festival was conceived by Jane’s Addiction front man, Perry Farrell, whose shows were legendary at L.A. rock clubs. Lollapalooza’s first festival took place in 1991 and is currently held in late July in historic Grant Park in downtown Chicago. But fans can be fickle; what’s hot can quickly cool and even festival organizers need to evolve to stay relevant.

Those who wanted a grunge element mixed with a hippie feel flocked to Coachella. In 1999, the first Coachella took place in the Coachella Valley in southern California. Every April, Coachella features many musical genres including pop, rock, indie, hip hop, and electronic dance music. The festival is not only known for its performances by popular musicians, but as a stylish place to make a bohemian fashion statement.

Festivals are a sensory experience—listening to music, feeling a warm breeze as you stroll outdoors with friends and family in the community, tasting delicious and different foods, people- watching, and shopping. Metro Detroit has many venues for music festivals, and it's time to get ready for these upcoming events. Save the date!