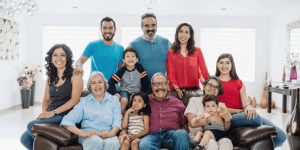 Hispanic Heritage Month is celebrated every year from September 15 to October 15 and commemorates the accomplishments, contributions and cultures of individuals with Spanish, Mexican, Caribbean, Central American or South American heritage. The library has a number of great titles you can check out to learn more about the history and culture of Hispanic Americans, as well as some interesting fiction to sink your teeth into this month.

El Norte by Carrie Gibson – El Norte chronicles the sweeping and dramatic history of Hispanic North America from the arrival of the Spanish in the early 16th century to the present—from Ponce de Leon's initial landing in Florida in 1513, to Spanish control of the vast Louisiana territory in 1762, to the Mexican-American War in 1846, and up to the more recent tragedy of post-hurricane Puerto Rico and the ongoing border acrimony with Mexico.

Finding Latinx by Paola Ramos – The host of VICE’s zLatin-Xy examines the growing influence and power of the estimated 32.5 million Latinxs in the U.S. under the age of 40 and how they are redefining Latinx identity.

Inventing Latinos by Laura E. Gómez – Part history, part guide for the future, Inventing Latinos argues that all Americans must grapple with Latinxs' dynamic identity—an identity that is impacting everything we think we know about race in America.

Latinx Photography in the United States by Elizabeth Ferrer – Introduces readers to Latinx portraitists, photojournalists, and documentarians and their legacies, including the experiences of immigration and marginalization common to many of their communities.

Chicano Folklore by Rafaela Castro – Understanding Chicano folklore, or the customs, rituals, and traditional cultural forms that Mexican Americans share, is extremely significant to comprehending the Chicano experience. Chicano Folklore is the first reference book to focus wholly on this subject.

Decoding "Despacito" by Leila Cobo – This rich oral history is a veritable treasure trove of never-before heard anecdotes and insights from Latin music artists, executives, observers, and players. Their stories, told in their own words, take you inside the hits, to the inner sanctum of the creative minds behind the tracks that have defined eras and become hallmarks of history.

Dominicana by Angie Cruz – In bright, musical prose that reflects the energy of New York City, Angie Cruz's Dominicana is a vital portrait of the immigrant experience and the timeless coming-of-age story of a young woman finding her voice in the world.

A Different Dawn by Isabella Maldonado – A family is murdered as they sleep, and FBI Special Agent Nina Guerrera and her new team are tasked with determining whether there is any link between this attack and another triple homicide from four years earlier and more than 2,000 miles away. Each crime scene reminds Nina of the ghostly Latin folktale of La Llorona. Now she must uncover the meaning behind the rituals as the evidence leads her in an unexpected direction, far closer to home than anyone could have imagined.

The House of Broken Angels by Luis Alberto Urrea – In this raucous story, the De La Cruzes, a family on the Mexican-American border, celebrate two of their most beloved relatives during a joyous and bittersweet weekend.

Afterlife by Julia Alvarez – A literature professor tries to rediscover who she is after the sudden death of her husband, even as a series of family and political jolts force her to ask what we owe to those in crisis within our families, biological or otherwise.

The Girls in Queens by Christine Kandic Torres – Told in alternating timelines and reminiscent of Dominicana, My Brilliant Friend, and Normal People, The Girls in Queens explores a lifelong friendship, the complications of sexual abuse allegations within communities of color, the furious loyalty of young women, and the danger of forgetting that sometimes monsters hide in plain sight.

Woman of Light by Kali Fajardo-Anstine – Merging two multi-generational storylines in Colorado, this is a novel of family love, secrets, and survival. With Fajardo-Anstine's immense capacity to render characters and paint vivid life, set against the Sange de Cristo mountains, Woman of Light is full of the weight, richness, and complexities of mixed blood and mica clay.

You Had Me at Hola by Alexis Daria – Rendered the subject of tabloid gossip after a messy public breakup, soap star Jasmine takes a part in a new bilingual comedy at the side of a telenovela costar who seeks to revitalize his career.

The Poet X by Elizabeth Acevedo – When Xiomara Batista, who pours all her frustrations and passion into poetry, is invited to join the school slam poetry club, she struggles with her mother's expectations and her need to be heard.