"And so it goes." These four short words that have inspired hundreds of awful tattoos and possibly one Taylor Swift song are from the classic novel Slaughterhouse-Five written by Kurt Vonnegut Jr. over 50 years ago.

On the 100th anniversary of his birth, November 11, 1922, we remember the writer by looking over some of his works. Vonnegut (the “Jr.” is usually dropped) was born in Indianapolis, Indiana. He attended Cornell University and joined the U.S. Army during World War II. He was captured by Germans and held in Dresden, where he was forced to dig out dead and charred bodies after the city’s bombing. After the war, he studied anthropology at the University of Chicago and later wrote journalism and public relations material.

Vonnegut’s experimental style and his way of blending weirdness, reality and satire with science fiction was one of the things that set him apart and increased his popularity over the years. He died in 2007.

Vonnegut was known for his dark humor and satire-filled prose. He wrote many books, but he was best known for only a few. In his autobiography, Palm Sunday, Vonnegut rates his most popular works as if they were educational courses on a report card. 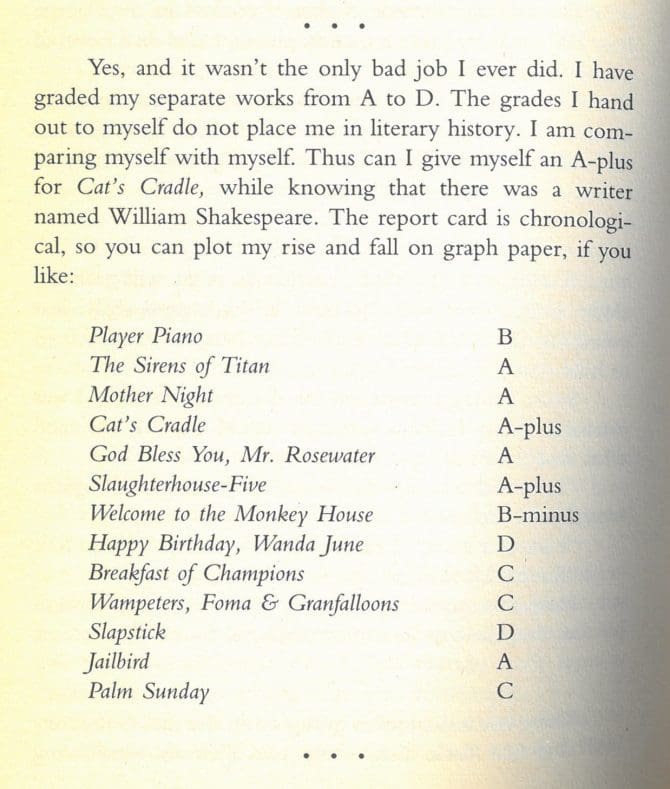 Did you know that on November 10, 1973, on the day before his 51st birthday, newspapers reported the burning of 36 copies of Slaughterhouse-Five by Kurt Vonnegut?

Vonnegut’s book was a mashup of real events and science fiction. The protagonist, Billy Pilgrim, was a World War II soldier who witnessed the firebombing of Dresden, as had Vonnegut himself. Billy ends up “unstuck in time” and lives a double life on an alien planet where a slow acceptance of this terrible way of life expresses itself philosophically, as shown in the resigned famous response in the book, “And so it goes.” In his life on Earth, Pilgrim preaches the same philosophy. Some found the book’s pessimistic outlook and black humor unsuitable for school children. Below is another excerpt from Palm Sunday in which Vonnegut publishes the letter he wrote to the teacher who burnt his novels.

"My novel ''Slaughterhouse-Five'' was actually burned in a furnace by a school janitor in Drake, North Dakota, on instructions from the school committee there, and the school board made public statements about the unwholesomeness of the book. Even by the standards of Queen Victoria, the only offensive line in the entire novel is this: 'Get out of the road, you dumb m(-----------).' This is spoken by an American anti-tank gunner to an unarmed American chaplain's assistant during the Battle of the Bulge in Europe in December 1944, the largest single defeat of American arms (the Confederacy excluded) in history. The chaplain's assistant had attracted enemy fire.

So on 16 November 1973, I wrote as follows to Charles McCarthy of Drake, North Dakota: 'Dear Mr. McCarthy: I am writing to you in your capacity as chairman of the Drake School Board. I am among those American writers whose books have been destroyed in the now famous furnace of your school.

Certain members of your community have suggested that my work is evil. This is extraordinarily insulting to me. The news from Drake indicates to me that books and writers are very unreal to you people. I am writing this letter to let you know how real I am.

I want you to know, too, that my publisher and I have done absolutely nothing to exploit the disgusting news from Drake. We are not clapping each other on the back, crowing about all the books we will sell because of the news. We have declined to go on television, have written no fiery letters to editorial pages, have granted no lengthy interviews. We are angered and sickened and saddened. And no copies of this letter have been sent to anybody else. You now hold the only copy in your hands. It is a strictly private letter from me to the people of Drake, who have done so much to damage my reputation in the eyes of their children and then in the eyes of the world. Do you have the courage and ordinary decency to show this letter to the people, or will it, too, be consigned to the fires of your furnace?'"

Celebrate Vonnegut’s 100th birth anniversary by reading one of his titles below, then let us know what grade you’d give it.