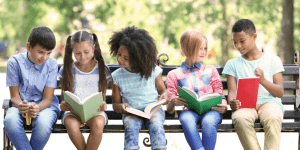 Ah summer reading, the time when parents and kids have very different views on what constitutes a great read. On one hand, we are delighted that they are reading anything to avoid that dreaded summer slide that teachers warn us of each year. On the other hand, we want our kids to read something worthwhile and beneficial to their minds. Well fellow parents, fret not, we have a list of books that will not only enrich your child's mind, but also are hot new titles that kids will actually want to read.

Each recommended title below is listed with an approximate age range, but feel free to encourage reading of books below your child's reading level, and offer to help with ones above as a family read or an awesome road trip audiobook.

It's the End of the World and I'm in My Bathing Suit – When the electricity goes out, 12-year-old Eddie and his friends set out to investigate when they make the startling discovery that they are the only ones left in their neighborhood—and perhaps the only people left anywhere. Recommended for ages 10-12. Also available in e-audio format.

This Is Not a Drill – Told in text messages, middle-schooler Ava is having a really bad day. Her parents are getting divorced, she had a big argument with her best friends, and the charge on her cellphone is getting low; but things are about to get a lot worse because the lockdown alarm has just gone off, and there is an intruder in the school building. Recommended for ages 10-12.

Lines of Courage – The stories of five kids living through World War I, each of whom holds the key to the others' futures... if they are lucky—and brave—enough to find each other. Recommended for ages 9-14. Also available in e-audio and e-book formats.

The Marvellers – Eleven-year-old Ella Durand is the first Conjuror to attend the Arcanum Training Institute, where Marvellers from all around the world come together to practice their cultural arts like brewing Indian spice elixirs, practicing Caribbean steel drum hypnosis, and bartering with fussy Irish faeries. Ella knows some people mistrust her Conjuror magic, often deemed "bad and unnatural," but she's eager to make a good impression—and, hopefully, some friends. Recommended for ages 9-14. Also available in e-audio and e-book formats.

My Otter Half – Oliver is a sea otter determined to prove that he's not a momma otter's boy. In an effort to show his bravery, he swims into Puget Sound where all the ships and humans are. That's when disaster strikes: An oil spill threatens the local wildlife and traps Oliver in the harbor. Franklin, an excitable dachshund puppy, is also lost. He's been separated from his owner, Lucy, and he has no idea how to get back to her. Now Oliver and Franklin must journey through the Pacific Northwest wilderness in search of their families. Recommended for ages 9-12.

Minecraft: Mob Squad – The Mob Squad were heroes not so long ago, but even the most heroic kid is still just a kid. The Mob Squad's leader, Mal, is still milking cows and dreaming of the next adventure. Their sharp-eyed archer Lenna is learning everything she can about the Overworld, but the horizon is still far away. Fearless warrior Chug is running a store with his brother, but his reputation for breaking stuff has some folks still calling him a bad apple. And his inventive brother, Tok... wait, where did Tok go?! Recommended for ages 9-12.

Zachary Ying and the Dragon Emperor – After his augmented reality gaming headset is possessed by the spirit of the First Emperor of China, 12-year-old Chinese American Zack Ying is compelled to travel across China to steal an ancient artifact, fight figures from Chinese history and myth, and seal a portal to prevent malicious spirits from destroying the human realm. Recommended for ages 9-12.

Ellie Makes Her Move – A magical spyglass reveals secrets that will bring four girls together in this new series. Recommended for ages 8-12. Also available in e-book format.

The Lucky Ones – In 1967, when his teacher loans him a copy of Charlie and the Chocolate Factory, 11-year-old Ellis Earl Brown is amazed to encounter a family worse off than his own and wonders if happy endings only come in books. Recommended for ages 8-12. Also available in e-book and e-audio formats.

Battle Royale – Which dangerous animals would win in a fight? Find out in this awesome bind-up of five books in the popular Who Would Win? series. The collection features a range of mammals, sea creatures, reptiles, and dinosaurs to satisfy all kinds of animal fans, including wolverine vs. Tasmanian devil, rhino vs. hippo, alligator vs. python, killer whale vs. great white shark, and tyrannosaurus rex vs. velociraptor. Kids will learn about each animal's anatomy, behavior, and more alongside photos, charts, illustrations, and amazing facts. Recommended for ages 6-9. Also available in e-book format.

The Haunted House Next Door – When supernatural things start happening in the house timid Andres and his parents just moved into, next-door-neighbor Desmond Cole, 8 years old, comes to the rescue. Recommended for ages 6-9.

So, you might have noticed there are 12 titles. Did you really think we would stop at eight? Here, have a few more...

Wildseed Witch – While the other girls have always known they were destined to be witches, Hasani is a Wildseed—a stray witch from a family of non-witches, with no background knowledge, no way to control her magic, and a lot to catch up on. "Wildseed" may be an insult that the other girls throw at her, but Wildseeds are more powerful than they know. And Hasani will learn that there are ways to use magic and thrive that can never be taught in a classroom. Recommended for ages 9-12. Also available in e-book and e-audio formats.

The Quest for the Golden Fleas – Zeus, a tiny hamster who believes he is the king of the gods, must find the legendary "Golden Fleas" and solidify his position before the other animals at Mount Olympus Pet Center rebel. Recommended for ages 8-12. Also available in e-book and e-audio formats.

Dungeon Academy – As the only human at the prestigious Dungeon Academy, Zelli, who is disguised as a minotaur, tries her best to blend in with the other monsters and creatures at the school, but when she notices a smaller student being bullied by a few of the meanest and scariest, she finds herself in more trouble than she asked for. Recommended for ages 6-10.

The Final Treasure – After their shocking discoveries on Summer Island, Marly, Sai, and Isla have one final set of clues to follow before reaching the end of their search. Recommended for ages 6-9.