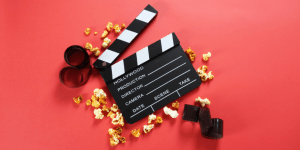 In 1928, the H.B. Reese Candy Company showed the world how perfectly chocolate and peanut butter complement each other with the introduction of what would come be known as the “Reese’s Peanut Butter Cup.” It’s such an iconic combination that many people use it as a metaphor to describe other perfect pairings like musicians, buddy cops, tag team wrestlers, and even movies.

Yes, we said movies. Do you want to know which films in the library’s collection go together so smoothly and effortlessly that they’re like the cinematic equivalent of a Reese’s Cup? Then read on! We’ve put together a list of 10 different double features, all available on DVD at the library, composed of films that are not part of the same franchise.

There’s just something special about Stephen Spielberg's monster movies. These two thrillers from early on and later in the director’s career show his aptitude and fondness for films about people trying to survive and overcome monstrous predators.

Pairing #2: The Rocketeer and Captain America: The First Avenger

Director Joe Johnston knows how to do pulp adventure and superheroes. Both of these films are set around the same time period and feature everyday heroes turned costumed vigilantes who must save the day and the world from the vilest of villains.

Pairing #3: Knives Out and Werewolves Within

What’s better than a good whodunit-style mystery? Why a genuinely hilarious one, of course. Both of these classic-style mysteries are laugh-out-loud funny and will keep you guessing the identity of the film’s murderer until the very end.

These two buddy cop action comedies feature two hilarious duos (Tom Hanks and Dan Akroyd in the former and Simon Pegg and Nick Frost in the latter) trying to balance their extreme personalities while also combatting clandestine cults who have a grip on the towns they’ve sworn to protect.

These films, one from a storied horror film franchise and the other the launch of a brand new one, are director Wes Craven’s interpretation of why the slasher genre has enthralled so many fans for many years. These two films launched the “meta-horror” craze of the ‘90s and serve as both love letters to and examinations of the horror genre.

When you task charismatic Saturday Night Live alumni with playing the flawed but lovable protagonists of a romantic comedy that finds them coming to terms with their shortcomings while navigating a cast of bizarre and often silly characters, something special happens. The former film is a grounded one about friendships starring Kristen Wiig. The latter is an existential farce starring Bill Murray about what it means to be part of a community.

Pairing 7: Dredd and The Raid: Redemption

Looking for an intense action double feature? We have just the pairing for you. Both of these films are about highly-trained law enforcers fighting for their lives against a criminal gang in a massive, locked-down apartment building. In the first movie, Karl Urban perfectly portrays the legendary comic book lawman, Judge Dredd. The second film features some of the best action stars in Indonesia, showing off their martial arts skills in action sequences that have to be seen to be believed.

Sometimes you just need some twisted, over-the-top, weird and hilarious fun. These two films will deliver a double shot of exactly that. The first pits Nicholas Cage’s mute drifter against a horde of possessed, murderous, animatronic, restaurant mascots. The second is the story of a lovable, megalomaniacal child and her pet—a bloodthirsty alien warlord.

Pairing #9: The Goonies and Back to the Future

These films, released by Stephen Spielberg’s Amblin Entertainment back in the ‘80s, are like a balm for the battered soul. They feature flawed, fun, and often funny protagonists on exciting adventures who are easy to root for. That’s certainly the case with these two ‘80s classics. The former is a tale of kids navigating trouble, traps and killers on a quest to find pirate gold and save their neighborhood. The latter is a film about a time-traveling teen trapped in the ‘50s on a comical quest to make sure his parents come together, and to return home to his own time.

Back to the Future