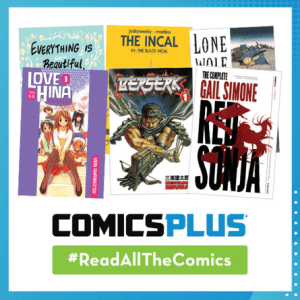 The Canton Public Library is happy to announce a new online resource, Comics Plus, has been added to our collection. Check out thousands of digital comics, graphic novels and manga without worrying about holds, waitlists, monthly limits or time limits. Read as much as you want, whenever you want, for as long as you want.

Comics Plus has everything from Big Nate, Awkward, Geronimo Stilton and more for kids. For teens and adults, the platform hosts tons of graphic novels from Dark Horse Comics and others like Black Hammer, God of War and more. Never wait for volume one again with all the manga Comics Plus has to offer, including Bungo Stray Dogs, Mob Psycho 100 and Spy Classroom.

Just download the app, available as Library Pass in the Google Play Store and LibraryPass in the Apple App Store, or log in on your computer to explore the dozens of publishers and thousands of comics, graphic novels and manga.