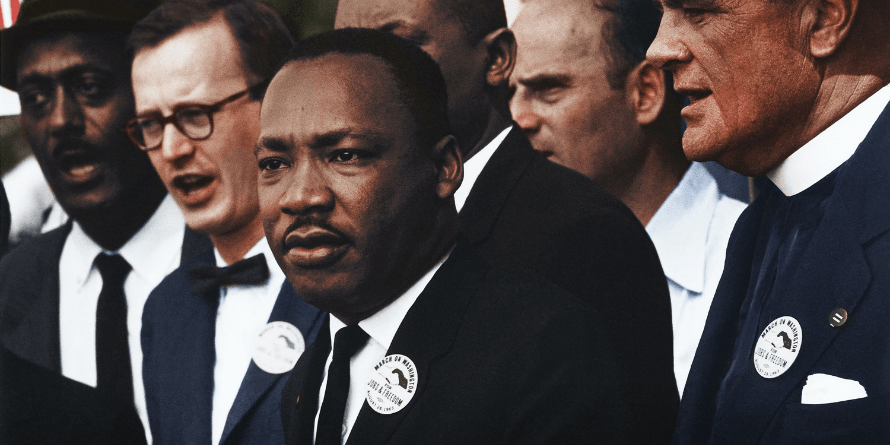 Every February, individuals and institutions across the country observe Black History Month. Organizations will host celebrations and special programs, schools will assign research projects, and folks from all walks of life will take special care to recognize the lives and legacies of Black Americans. Here at Canton Public Library, we will be highlighting the works of Black creators in our collections through web content and displays. Today, Black History Month is a far-reaching, momentous cultural event, but it wasn’t always this way. The very existence of Black History Month is both the monumental culmination of decades worth of hard work by Black activists and scholars, as well as just another small piece of the fight for Black Liberation, a movement that persists today in the form of Black Lives Matter.

The first nationally recognized Black History Month occurred in February 1976. President Gerald Ford issued a proclamation as part of the United States’ bicentennial celebrations, asking all Americans to join in honoring "the too-often neglected accomplishments of Black Americans in every area of endeavor throughout our history.” Ten years later in 1986, Congress passed Public Law 99-244 which officially designated February as “National Black (Afro-American) History Month." Of course, this never would have happened without loud public demand and pressure exerted by the civil rights movement. In both instances, the government was spurred to action by the work of Black activists across the country who had been observing Black History Month on their own for years; activists like Erwind Blount, the leader of Black United Students (BUS), a campus organization that brought Black History Month to Kent State University in 1970.

That first Black History Month at Kent State was a hard-won accomplishment by Blount and the Black students at the University. It was celebrated with a month of lectures and readings by scholars and artists such as Gwendolyn Brooks, the first Black person to win a Pulitzer Prize, and Babatunde Olatunji, a Nigerian drummer and founder of the first Center of African Culture in the United States. There was also a celebration for the opening of Kent State’s own Black Cultural Center on campus. BUS collaborated with other organizations on campus to ensure that the events could be free to attend for all students, a massive effort given that the University didn’t officially sponsor any of them. Indeed, Blount and his peers faced pushback from faculty and administration at every turn, but their grit and determination persevered. Their continued activism and organization eventually led to the creation of the Department of Pan-African Studies at Kent State.

BUS’ Black History Month was partially inspired by the work of leaders like Frederick H. Hammurabi. Hammurabi started celebrating “Negro History Month” in the 1960s at his House of Knowledge in Chicago. Devoted to studying “African-American history and historic links between African-Americans and African culture and traditions,” the House of Knowledge was a cultural hub in Bronzeville, an iconic neighborhood in Chicago sometimes known as “Black Metropolis.” An accomplished writer and rabble-rouser, Hammurabi and the House of Knowledge were known for publishing books and pamphlets, producing movies and holding film screenings, and the dissemination of radical literature. This tradition lives on in the contemporary work of artists like Noname, a rapper-turned-activist from Chicago who recently opened the Radical Hood Library, “a Black-led, Los Angeles-based literary liberation project that was created to service Black and brown people.” The library is the headquarters of the “Noname Book Club” which promotes works by Black, Indigenous, and other People of Color, and distributes books to incarcerated people through their Prison Chapters program.

Hammurabi himself built on the work of Dr. Carter G. Woodson, a man often referred to as the "Father of Black History," who founded “Negro History Week” in 1926. Woodson was an impressive, influential figure. Born in 1875 in New Canton, Virginia, he was the only American whose parents were slaves to earn himself a Ph.D, and the second Black American to graduate from Harvard (after W.E.B. du Bois). In 1915, Woodson brought a Black History display to an exhibition in Washington D.C. The event was in honor of the fiftieth anniversary of emancipation and brought a crowd of thousands of Black folks from across the country who travelled to view the exhibits. So taken with the enthusiasm of the crowd, Woodson was inspired to found the Association for the Study of Negro Life and History, which was later renamed the Association for the Study of African American Life and History (ASALH).

The next year, in 1916, Woodson started The Journal of Negro History. In 1924 he collaborated with his fraternity, Omega Psi Phi, to start “Negro History and Literature Week” as a way to promote the stories and achievements of the Black folks that he and his colleagues were researching, as well as African American scholarship in general. This week became known as “Negro Achievement Week” before finally evolving into ASALH’s Negro History Week in 1926. Woodson chose one particular week in February because it encompassed the birthdays of both Abraham Lincoln and Frederick Douglass. The Black community had already been celebrating both of these birthdays for years, and Woodson intended his History Week to fold into, and then replace, these celebrations.

"Woodson believed that history was made by the people, not simply or primarily by great men. He envisioned the study and celebration of the Negro as a race, not simply as the producers of a great man. And Lincoln, however great, had not freed the slaves— the Union Army, including hundreds of thousands of black soldiers and sailors, had done that. Rather than focusing on two men, the black community, he believed, should focus on the countless black men and women who had contributed to the advance of human civilization."

From Douglass and Lincoln, to Woodson, Hammurabi, and Blount, and on to the modern work of anti-racism activists and BLM, the story of Black History Month is intertwined with the story of Black Liberation. It isn’t about the work of singular heroes, rather the story of community organizing and how a movement builds, evolves, and triumphs in the face of oppression. To this day, ASALH stewards the promotion of Black History Month by issuing annual themes and hosting events. This year, the theme is “Black Health and Wellness” and ASALH will be hosting free virtual programs on their website all month long. Canton Public Library encourages you to attend some of these events if you are able, and hope that you’ll join us in reflection and celebration of Black lives.

iamshaheeda. (2018, May 4). BUS and IAAA: The key relationship behind Kent’s black campus movement. A digital history of the civil rights and black power movements at KSU. https://digitalhistoryofcivilrightsandblackpoweratksu.wordpress.com/category/black-campus-movement/