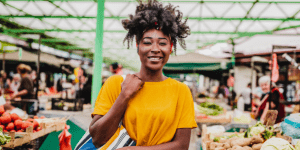 Farmers markets are many peoples' preferred way to buy locally grown fresh produce during the summer months, and if that isn’t enough to draw you in, they often have much more to offer. Many exist as, or are part of, organizations dedicated to providing healthy, nutritious food to people who don’t always have access to it in other ways. These markets often operate in some capacity year-round and have a wider variety of goods available than you might think. Some even host an array of community events, and many markets are considered destinations for socializing. There are dozens of farmers markets just in our region of Southeast Michigan, and hundreds more beyond that, but let’s focus on a few shining stars in our area.

First up, it’s none other than our very own Canton Farmers Market. Started in the 1950s as a way to help local farmers of the “Sweet Corn Capitol of Michigan” sell their produce, it drew in vendors and customers from miles around, which continues to be the case to this day. The current regular season market runs every Sunday from May 8 to October 16 at Preservation Park, 500 N. Ridge Road in Canton. Off-season markets are held on one day in February, March, and April (exact dates are to be announced later in 2022) at the Summit on the Park Banquet Center, 46000 Summit Parkway in Canton. Details about other services, such as their mobile farmers market and holiday artisan market, can be found on their website.

Next, we have Detroit’s own Eastern Market. Originally founded in the 1800s, it became a cornerstone of the community when the modern Eastern Market Partnership developed infrastructure to support the market's central mission: the nutritional, cultural, and economic enrichment of Detroit. Eastern Market is open year-round on Saturdays, and additionally on Tuesdays and Sundays from June to September at their impressive central location at 1445 Adelaide, Detroit. For details about vendors and parking, see their website.

Third on our tour is the renowned Ann Arbor Farmers Market, established in 1919 on 4th Street, and later moved to its current location on Detroit Street in 1931.The market regularly draws in vendors and customers from near and far, and runs all year round, with a traditional produce-focused Farmers Market on Saturdays, and an Artisan Market that features hand crafted items of all sorts on Sundays. Both markets can be found at the same location: 315 Detroit Street in Ann Arbor. To learn more, including where to park (always a concern when visiting Tree Town), visit their website.

Ypsilanti has two farmers markets run by Growing Hope, a community-funded organization dedicated to providing healthy, affordable food to all Ypsilanti residents. The original market opened in 1919 near downtown Ypsilanti, relocating several times before finding its current location in Depot Town in the 1970s. Founded in 2003, Growing Hope initially focused on school and community gardens, but noticed that the Depot Town market wasn’t accessible to many downtown residents. Thus, in 2006, they founded a downtown market specifically targeted towards locals within walking distance. Not only did the new market address this food desert, it helped revitalize the city of Ypsilanti and remains a lively and active event. The downtown market is held at 16 South Washington St. in Ypsilanti on Tuesdays between late May and October. Growing Hope also took over management of the Depot Town market in 2013, which continues to be a popular destination on Saturdays at 100 Rice St. in Ypsilanti during the same general yearly timeframe, with occasional off-season markets hosted by local restaurants. For more information, check out their website.

Founded in 1925 by the city of Royal Oak and Oakland County to serve the growing community, the Royal Oak Farmers Market has drawn farmers from miles away for decades, with the original 1927 brick and tile building still in use today. Since then, the market has expanded its activities to include artisan markets, flea markets, and numerous activities for community organizations. What started as a way to support a small community in the growing and shipping of fresh rhubarb has grown into an institution symbolic of the city, with residents taking direct action to prevent it from being sold to developers in 1996. With numerous weddings, food truck rallies, and craft shows making use of the venue year-round, it’s no wonder the Saturday market runs 52 weeks a year, while the Friday market runs from May to Thanksgiving at the lovely and well-maintained market building located at 316 East 11 Mile Rd in Royal Oak. To learn more, see their website.

Lincoln Park’s Farmers Market is a relative newcomer, founded in 2007 as Downriver’s first farmers market. It’s also the first Sunday market in all of Wayne County, making the market a vital way for the local community to access fresh food and produce. With farmers coming from Wayne, Monroe, and Washtenaw counties, and special events throughout the season, it’s no wonder that this relatively new market draws crowds into the hundreds during their June to October season. Check out the market on Sundays located at the Southwest corner of Fort Street and Southfield Road in Lincoln Park, and don’t miss their website.

Finally, let’s go a little further afield and look at the Toledo Farmers Market. The first market in Toledo opened in 1832 along Monroe, Superior, and Washington Streets as a convenient place for the community to buy and sell produce and livestock. The stalls were relocated in 1917, and again in 1928 when they merged with an indoor wholesale market, both of which continued to grow over the years. As the years went on, the market stalls began to literally sink into the dirt, making them increasingly difficult to enter and shop from. After a decades long urban construction and improvement project aimed at revitalizing downtown Toledo, which in no small part involved making the Farmer’s Market more accessible and appealing, the current market building opened in the spring of 1996 and has remained a popular place to shop and socialize ever since. Local celebrities and politicians have been known to make a point to “be seen” at this market, which boasts and impressive array of vendors and products. To learn more about it, visit their website or see the market in person on Saturdays year-round at 525 Market St, Toledo, OH.

Farmers markets are, and were, an important part of the communities where they take place, offering fresh and healthy food, economic opportunity, social cohesion, and support to the people and places that make them possible. If you’ve never been to one, pick a market to visit from above, or find one that fits your schedule, and see for yourself what’s so special about them. If you’re already a market fan, let us know what you love best.